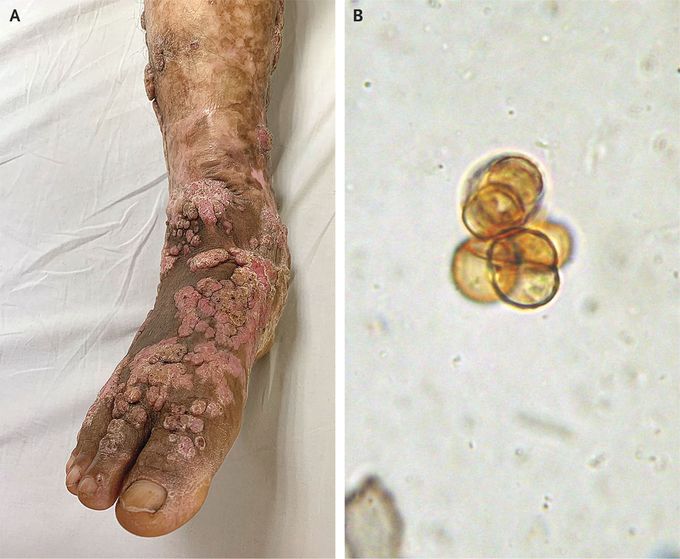 A 41-year-old farmer presented to the outpatient infectious disease clinic with a 20-year history of slowly growing lesions on the right leg that had progressed over time to cause gait abnormality. The lesions initially began as painless, pruritic papules on the knee and gradually spread to the dorsum of the foot. Physical examination revealed palpable, coalescent, subcutaneous nodules with verrucous lesions and associated skin changes (Panel A). Examination of a skin scraping prepared with 10% potassium hydroxide revealed pigmented, thick-walled, multicellular structures known as Medlar bodies (also called sclerotic cells) (Panel B), a finding that suggested chromoblastomycosis, a chronic, subcutaneous mycosis that can develop at sites of skin trauma. Fonsecaea pedrosoi, a saprophyte found in soil and a causative agent of chromoblastomycosis, was grown on culture. Daily treatment with 400 mg of oral itraconazole was initiated and continued for 1 year, with slight abatement of the lesions. Further treatment with cryotherapy is planned