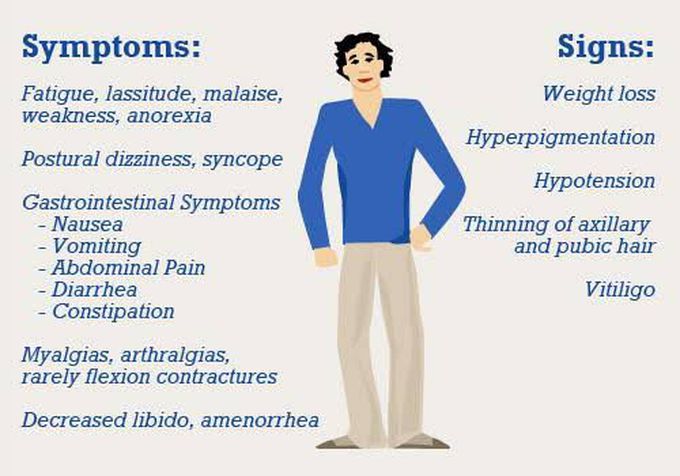 What do you know aout Addison's disease?

Addison’s disease (also known as primary adrenal insufficiency or hypoadrenalism) is a rare disorder of the adrenal glands. The adrenal glands are two small glands that sit on top of the kidneys. They produce essential hormones: cortisol, aldosterone and adrenaline. In Addison's disease, the adrenal gland is damaged, and not enough cortisol and aldosterone are produced. About 8,400 people in the UK have Addison's disease. It can affect people of any age, although it's most common between the ages of 30 and 50. It's also more common in women than men. Early-stage symptoms of Addison’s disease are similar to other more common health conditions, such as depression or flu. You may experience: fatigue (lack of energy or motivation) muscle weakness low mood loss of appetite and unintentional weight loss increased thirst Over time, these problems may become more severe and you may experience further symptoms, such as dizziness, fainting, cramps and exhaustion. You may also develop small areas of darkened skin, or darkened lips or gums. Although these symptoms aren’t always caused by Addison’s disease, you should see your GP, so they can be investigated.