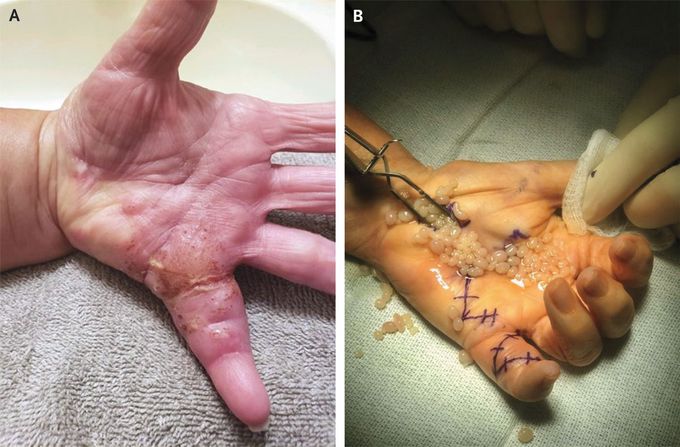 Rice Bodies in Tenosynovitis Due to Psoriatic Arthritis

A 74-year-old woman presented to the infectious diseases clinic with a 4-year history of swelling of the fifth finger on the left hand. She had a history of psoriatic arthritis that had been treated with a tumor necrosis factor inhibitor and methotrexate. On physical examination of the left hand, there was redness and swelling from the metacarpophalangeal joint to the distal interphalangeal joint in the proximal and middle phalanges of the fifth digit; the redness and swelling extended across the palm, with predominant involvement in the hypothenar region (Panel A). Flexion of the fifth finger was limited. There were also nontender, mobile, subcutaneous nodules in the hypothenar region and over the proximal fifth finger. Magnetic resonance imaging of the left hand revealed tenosynovitis of all flexor tendons. A carpal-tunnel release and fifth-finger flexor tenosynovectomy were performed. After incision of the transverse carpal ligament, numerous “rice bodies” — grainlike particles that form in joints in the context of infectious or noninfectious chronic inflammation — were found in the carpal tunnel (Panel B). More rice bodies were released after the fifth-finger tendon sheaths were incised. Microbiologic and molecular studies were negative for bacteria, fungi, and mycobacteria. Histopathological testing showed papillary synovial hyperplasia with chronic inflammation and fibrinous nodules. A final diagnosis of inflammatory tenosynovitis with rice bodies associated with psoriatic arthritis was made. Treatment with oral glucocorticoids was initiated. At 6 weeks of follow-up, the patient’s symptoms had abated. Mauricio Kahn, M.D. Molly Fleece, M.D. University of Alabama at Birmingham, Birmingham, AL source: nejm.org