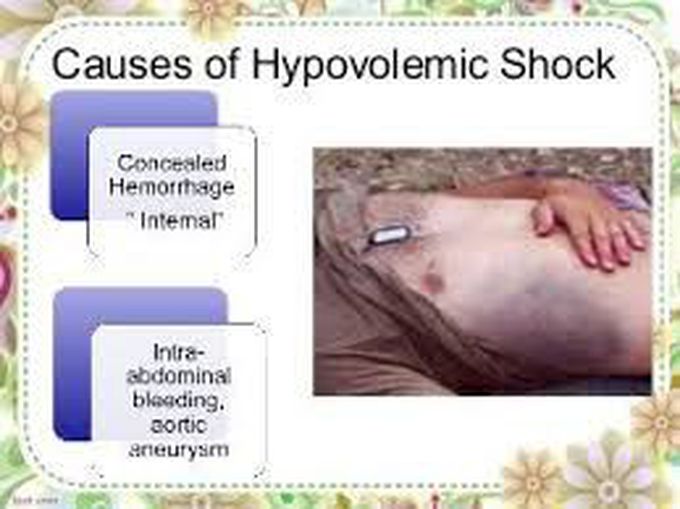 Hypovolemic Shock Causes Causes of hypovolemic shock that involve bleeding include: Broken bones around your hips Cuts on your head and neck Damage to organs in your belly, including your spleen, liver, and kidneys, because of a car accident or a bad fall A tear in your heart or a large blood vessel, or a weakened spot in a large blood vessel that could burst Problems with your digestive tract, such as ulcers An embryo growing outside a woman’s uterus (ectopic pregnancy) The placenta peeling away from the wall of a pregnant woman’s uterus (placental abruption) A ruptured ovarian cyst Heavy bleeding during labor or delivery, or in the following 24 hours A disorder in which the tissue that usually lines a woman’s uterus grows outside it (endometriosis) Causes that don’t involve bleeding include: Dehydration Diarrhea and vomiting High fever Severe sweating Other gastrointestinal problems like stoma or fistulas Kidney disease and diuretics Fluids getting stuck in one part of your body because of a condition like pancreatitis or intestinal blockage