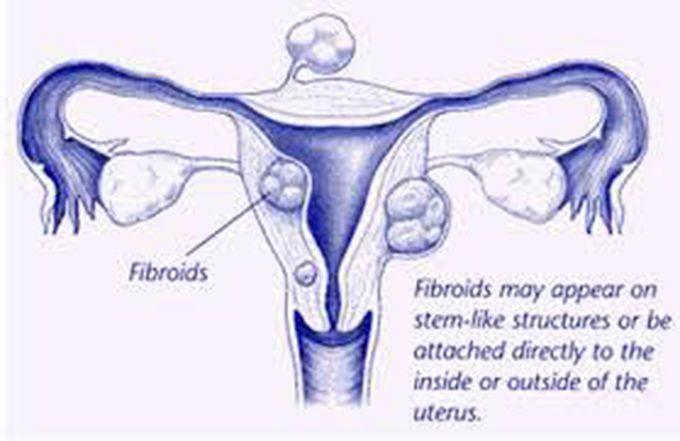 How are fibroids treated? Your doctor will develop a treatment plan based on your age, the size of your fibroids, and your overall health. You may receive a combination of treatments. Home remedies and natural treatments Certain home remedies and natural treatments can have a positive effect on fibroids, including: acupuncture yoga massage Gui Zhi Fu Ling Tang (GFLT), a traditional Chinese medicine formula applying heat for cramps (avoid heat if you experience heavy bleeding) Dietary changes can help as well. Avoid meats and high-calorie foods. Instead, opt for foods high in flavonoids, green vegetables, green tea, and cold-water fish such as tuna or salmon. Managing your stress levels and losing weight if you’re overweight can also benefit women with fibroids. Medications Medications to regulate your hormone levels may be prescribed to shrink fibroids. Gonadotropin-releasing hormone (GnRH) agonists, such as leuprolide (Lupron), will cause your estrogen and progesterone levels to drop. This will eventually stop menstruation and shrink fibroids. GnRH antagonists also help to shrink fibroids. They work by stopping your body from producing follicle-stimulating hormone (FSH) and luteinizing hormone (LH). Examples include: ganirelix acetate, an injectable drug cetrorelix acetate (Cetrotide), an injectable drug elagolix, which is present in the oral drug elagolix/estradiol/norethindrone acetate (Oriahnn) Other options that can help control bleeding and pain, but won’t shrink or eliminate fibroids, include: an intrauterine device (IUD) that releases the hormone progestin over-the-counter (OTC) anti-inflammatory pain relievers, such as ibuprofen (Advil) birth control pills Surgery Surgery to remove very large or multiple growths may be performed. This is known as a myomectomy. An abdominal myomectomy involves making a large incision in the abdomen to access the uterus and remove the fibroids. The surgery can also be performed laparoscopically, using a few small incisions into which surgical tools and a camera are inserted. Fibroids might grow back after surgery. If your condition worsens, or if no other treatments work, your physician may perform a hysterectomy. However, this means that you won’t be able to bear children in the future.