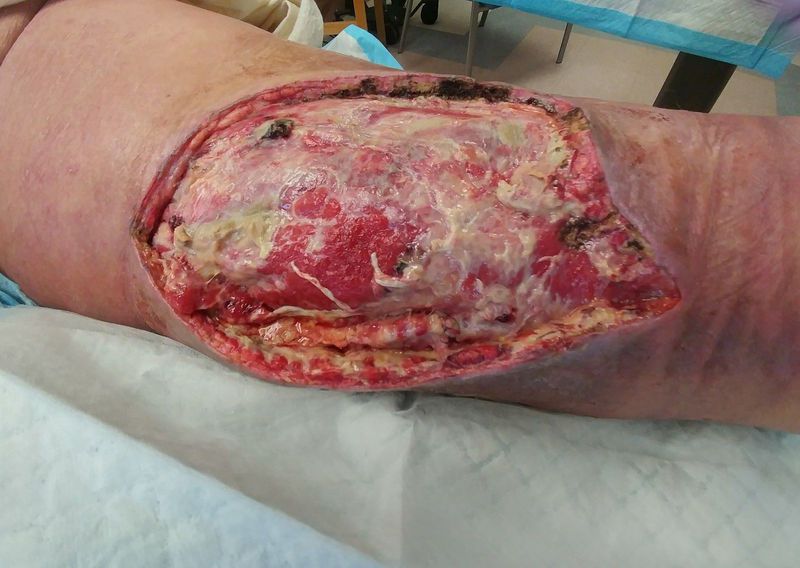 Flesh-eating bacteria (necrotizing fasciitis) is a rare infection of the skin and tissues below it. It can be deadly if not treated quickly. Necrotizing fasciitis spreads quickly and aggressively in an infected person. It causes tissue death at the infection site and beyond. Flesh-Eating Bacteria Causes and Risk Factors Necrotizing fasciitis is commonly caused by group A streptococcus (GAS) bacteria. That's the same type of bacteria that causes strep throat. But, several types of bacteria, such as staphylococcus and others, have also been linked to the disease. Necrotizing fasciitis happens when these types of bacteria infect the superficial fascia, a layer of connective tissue below the skin. Flesh-eating bacteria transmission The bacteria that cause necrotizing fasciitis can enter the body through: Surgical wounds Puncture wounds or other injury Burns Minor cuts Insect bites Abrasions In some cases, it is unknown how the infection began. Once it takes hold, the infection rapidly destroys muscle, skin, and fat tissue. Having a weakened immune system and certain diseases may make you more likely to get flesh-eating bacteria (necrotizing fasciitis). Health conditions that may raise your risk include: Alcohol abuse Cancer Chickenpox (in childhood) Cirrhosis Diabetes Heart disease affecting the heart valves Chronic kidney disease Lung disease, including tuberculosis Peripheral vascular disease Steroid use Use of injectable or IV drugs Flesh-Eating Bacteria Symptoms The early symptoms of an infection with flesh-eating bacteria usually appear within the first 24 hours of infection. Symptoms are similar to other conditions like the flu or a less serious skin infection. The early symptoms are also similar to common post-surgical complaints, such as: Serious pain Inflammation Fever Nausea Symptoms often include a combination of the following: Increasing pain in the general area of a minor cut, abrasion, or other skin opening. Pain that is worse than would be expected from the appearance of the cut or abrasion. Redness and warmth around the wound, though symptoms can begin at other areas of the body. Flu-like symptoms such as diarrhea, nausea, fever, dizziness, weakness, and general malaise. Intense thirst due to dehydration. More advanced symptoms happen around the painful infection site within 3 to 4 days of infection. They include: Swelling, possibly along with a purplish rash Large, violet-colored marks that turn into blisters filled with dark, foul-smelling fluid Discoloration, peeling, and flakiness as tissue death (gangrene) happens Critical symptoms, which often occur within 4 to 5 days of infection, include: A severe drop in blood pressure Toxic shock Unconsciousness Flesh-Eating Bacteria Diagnosis Flesh-eating bacteria (necrotizing fasciitis) affects the body quickly, making early diagnosis important to survival. The doctor will examine you and review your symptoms. Having flesh-eating bacteria is a medical emergency, and if a doctor suspects you may have it, you’ll likely be admitted to a hospital and get tested there. Tests to diagnosis flesh-eating bacteria (necrotizing fasciitis) include: Blood tests. People with flesh-eating bacteria have high levels of white blood cells. Tissue biopsy. You may need exploratory surgery to remove some of the tissue from the infected area. The tissue is sent to a lab to identify the particular bacteria that’s causing the infection. But you’ll be given some medicine to treat the infection before test results are back. CT scan. A CT scan can show your doctor where fluid and pus are collecting in the body. It also shows the presence of gas bubbles under the skin, which helps confirm the diagnosis. Household members and others who have had close contact with someone with necrotizing fasciitis should be tested for the disease if they have symptoms of an infection. Flesh-Eating Bacteria Treatment Patients infected with flesh-eating bacteria will undergo several types of treatment. The extent of treatment depends on the stage of the disease when treatment is started. The treatment includes: Intravenous antibiotic therapy. Surgery to remove damaged or dead tissue in order to stop the spread of infection. Medications to raise blood pressure. Amputations of affected limbs, in some cases. Hyperbaric oxygen therapy may be recommended to preserve healthy tissue. Cardiac monitoring and breathing aids. Blood transfusions. Intravenous immunoglobulin. This supports the body's ability to fight infection. Flesh-Eating Bacteria Complications Serious complications are common and may include: Sepsis Shock Organ failure Loss of an arm or leg due to amputation Severe scarring Death Flesh-Eating Bacteria Prevention Washing your hands with soap and water or using an alcohol-based hand sanitizer is one of the best steps you can take to prevent flesh-eating bacteria and other skin infections. You can also prevent skin infections by taking these steps: Always clean cuts and open wounds with soap and water. After cleaning, cover an oozing, draining, or open wound with a clean, dry bandage. Get treated by a doctor if you have a serious or deep wound, such as a puncture or gunshot. Don’t go swimming or use a hot tub if you have an open wound or skin infection. There’s no vaccine available to prevent flesh-eating bacteria infection.