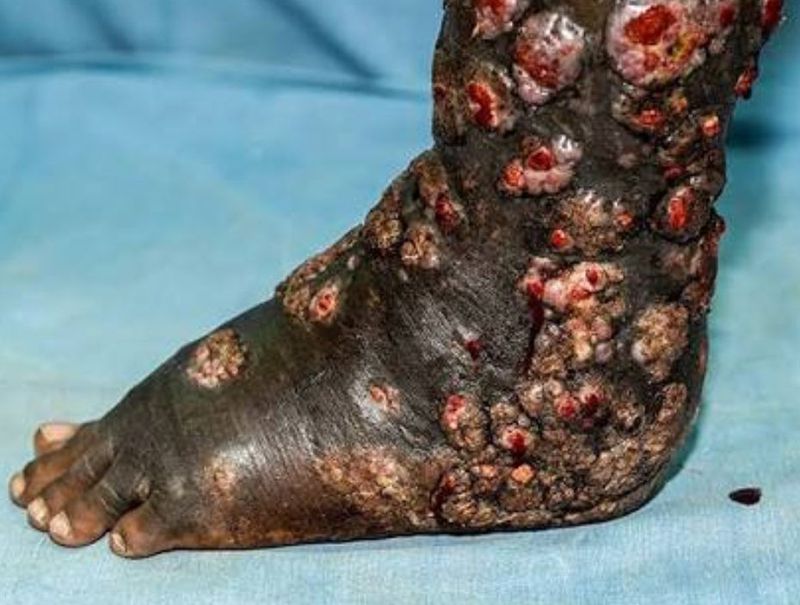 Eumycetoma is a chronic granulomatous fungal disease of humans, affecting mainly the limbs, and sometimesthe abdominal and chest walls or the head. Mycetoma pedis (mycetoma of the foot), the most common form of mycetoma, is known widely as the Madura foot. The infection is endemic in Africa, India and Central and South America.The disease is also found in other areas but not on an endemic scale. Signs and symptoms The initial lesion is a small subcutaneous swelling following minor trauma. Later, sinuses that discharge purulent and seropurulent exudates containing grains which are fungal colonies are formed.Destruction of deeper tissues, and deformity and loss of function in the affected limbs may occur in later stages. Diagnosis Diagnosis of mycetoma is usually established clinically in endemic areas. X rays and ultrasonography may be employed in evaluating the extent of the disease. X rays findings are extremely variable. The disease is most often observed at an advanced stage that exhibits extensive destruction of all bones of the foot. Rarely, a single lesion may be seen in the tibia where the picture is identical with chronic osteomyelitis. Cytology of fine needle aspirate or pus from the lesion, and tissue biopsy may be undertaken sometimes. Some publications have claimed a "dot in a circle sign" as a characteristic MRI feature for this condition (this feature has also been described on ultrasound). Causes Mycetoma may be caused by bacteria from the phylum Actinomycetes, or by fungi (Eumycetes) where it is called eumycetoma. Treatment Drugs like ketoconazole, voriconazole,and itraconazole are generally employed in treating the infection. Actinomycetes usually respond well to medical treatment, but the eumycetes are generally resistant and may require surgical interventions including salvage procedures as bone resection or even the more radical amputation.