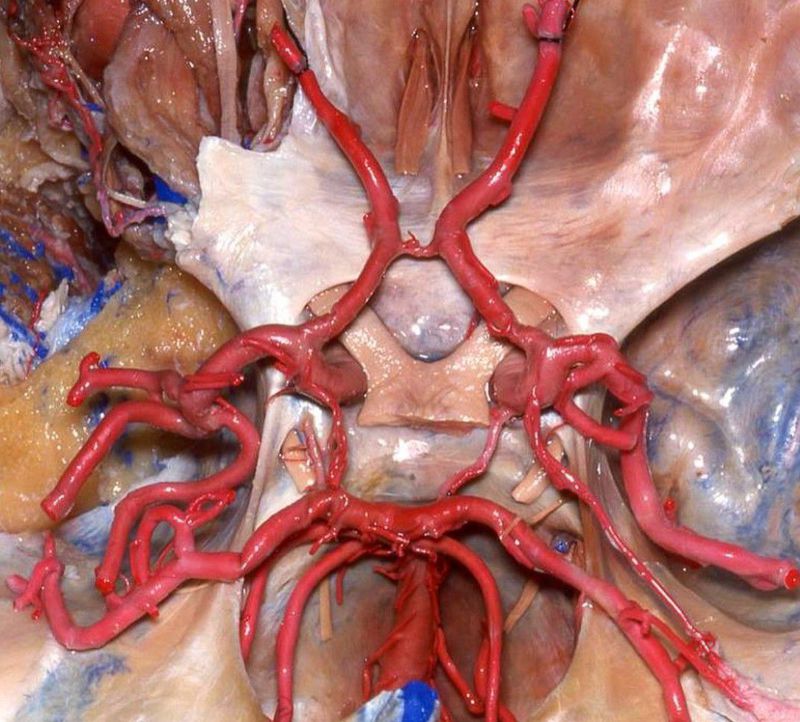 This is a rare specimen of the Circle of Willis — a vascular circuit formed by the anastomoses between branches of the internal carotid arteries (anterior circulation) and vertebral arteries (posterior circulation) around the optic chiasm and pituitary stalk!! The circle of Willis is a polygonal structure of blood vessels present at the base of brain which distributes oxygen-rich arterial blood to the cerebral mass. The base of the brain is the place where the vertebro-basilar system and internal carotid system of vessels meet or anastomose. The anastomosis of these two systems occurs in the interpeduncular cistern and forms an arterial circle called ‘Circle of Willis’. These vessels branch from the internal carotid arteries on each side, which branches laterally into the middle cerebral artery that gives branches toward the front and back of the brain, into the anterior and posterior cerebral arteries. These paired arteries are interconnected and communicating, thus giving us the shape of a circle. The middle cerebral artery is often invoked in the case of stroke, aneurysms, and rupture which subsequently leads to intracranial bleeding (subarachnoid hemorrhage) and is an emergency situation. Most saccular cerebral aneurysms, also known as berry aneurysms, occur in the anterior circulation of the brain, usually at the junction of the anterior cerebral artery and the anterior communicating artery in the circle of Willis. They are the most common cause of nontraumatic subarachnoid hemorrhage