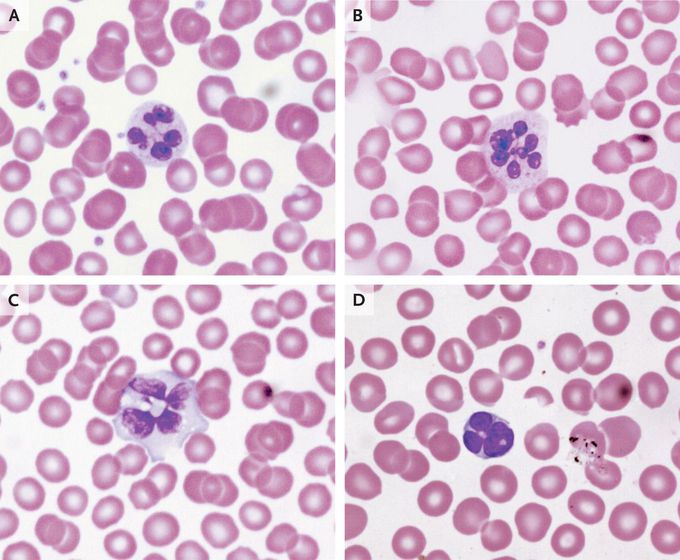 A 26-year-old man was found unresponsive at work. When examined by emergency medical service responders, he had a temperature of 41.9°C, a heart rate of 150 beats per minute, unrecordable blood pressure, and a score of 4 on the Glasgow Coma Scale (eyes 1, verbal 2, motor 1; total scores range from 3 to 15, with lower scores indicating reduced levels of consciousness). He was intubated, resuscitated, and cooled. Laboratory tests showed a hemoglobin level of 14 g per deciliter, a white-cell count of 13,700 per cubic millimeter (neutrophils, 8200 per cubic millimeter, with a myeloid left shift), and a platelet count of 172,000 per cubic millimeter. A blood film showed that 90% of neutrophils (Panels A and B), 98% of monocytes (Panel C), and 22% of lymphocytes (Panel D) had unusual nuclear morphologic features. The nuclei showed hypersegmentation, with the segments connected by thin filaments and arranged radially. These morphologic characteristics have been previously described as botryoid nuclei. After obtaining a medical history and a drug screen, we gave the patient a diagnosis of methamphetamine-induced hyperthermia. Botryoid white-cell nuclei are unusual and have been found in patients with hyperthermia. Other causes of hyperthermia in such cases have included heatstroke, hemorrhagic shock and encephalopathy syndrome, autoimmune encephalitis, malignant hyperthermia of anesthesia, and cocaine overdose. The patient had multiorgan failure and required treatment in the intensive care unit, but he ultimately survived his acute illness and was discharged from the hospital.