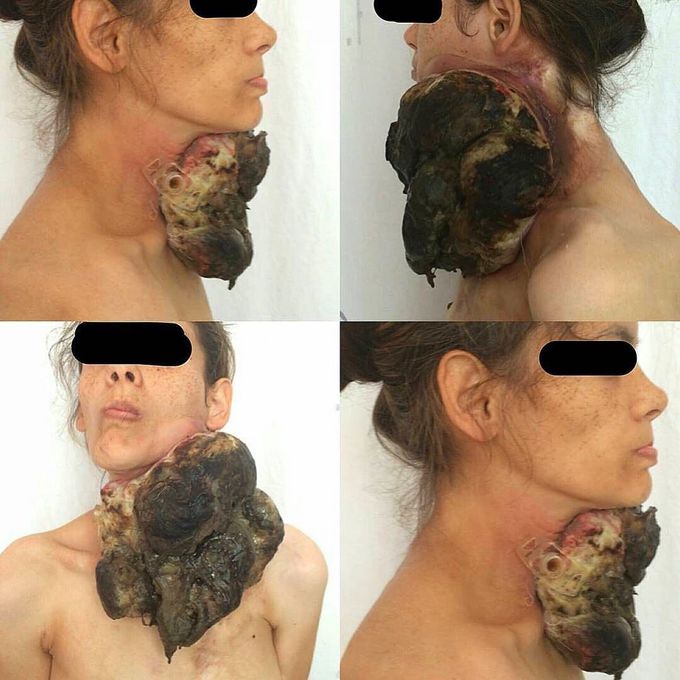 A desmoid tumour is a type of benign fibromatosis arising from musculo-aponeurotic structures. It is clinico-pathologically classified into two subtypes, intra- and extra-abdominal, and it is mainly developed in the abdomen. They are locally infiltrative, resulting in a high rate of local recurrence following surgical resection. Due to the rarity of these tumors in the head and neck region, this post aims to present a rare case of a desmoid tumor developed in the lateral neck region accompanying neck swelling and diffuse uncontrolled growth which was gradually increasing in size for more than a year. These tumors arise from cells called fibroblasts. Fibroblasts are found throughout our body and their main function is to provide structural support and protection to the vital organs such as lung, liver, blood vessels, heart, kidneys, skin, intestines etc. They also play a critical role in wound healing. When fibroblast cells undergo mutations they can become cancerous and become desmoid tumors (also known as "aggressive fibromatosis"). Desmoid tumors can arise in virtually any part of the body. These tumors often occur in women in their 30's, but can occur in anyone at any age. Desmoid tumors can be slow growing or extremely aggressive. They do not metastasize (move from one body part to another), and if slow growing they can be carefully watched and followed by the physician. However, when they are aggressive they can cause life threatening problems or even death when they compress vital organs such as intestines, kidney, lungs, blood vessels, and nerves. Photo by @cpmantrana

Why wait until it gets like this? Was the patient treated? After pictures? It’s always heartbreaking to see patients like this. What does this say about the conditions in which they live that they don’t seek treatment or medical interventions. Is this operable? She clearly had breathing issues AEB the trach.