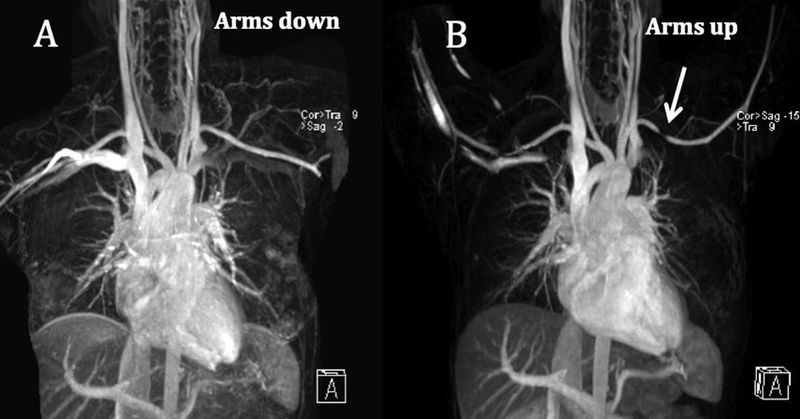 Thoracic Outlet Syndrome (TOS) refers to the constellation of symptoms due to compression of the brachial plexus and subclavian vessels as they traverse the thoracic outlet between the anterior and middle scalene muscles. MRA is the preferred imaging modality for TOS because of its better soft tissue resolution and tissue characterization capability without the use of radiation. Upper extremity abduction is the standard practice and is shown to be effective as a positional maneuver for diagnosis of TOS. Diameter change by 430% for subclavian artery and by 450% for subclavian vein between the neutral and abducted extremity positions is considered significant for the diagnosis of TOS (fig.) Figure Coronal MIP MRA image with arms down (A) shows normal upper extremity inflow arteries. Coronal MIP MRA with abduction of the arms (B) shows severe stenosis of the left subclavian artery (arrow) suggesting arterial thoracic outlet syndrome (P. Nagpal et al. 2016)